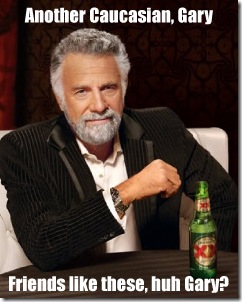 If you live in the US, you’ve probably heard of "The Most Interesting Man in the World." He’s this high-living achiever who helps sell beer for Dos Equis, a Mexican oat soda company.

The conceit is this: He’s way more awesome than you are. This smarter feller than ourselves has done everything imaginable in his life, been everywhere, seen everything, and is still raring to go. "Stay thirsty, my friends" is his catch phrase. He’s a real man’s man, and a woman’s too: When he talks, hot bimbos a third his age leer at him, desirous and confused as starving cats at a parakeet convention.

"I don’t always drink beer, but when I do, I drink Dos Equis," is another one of his famous lines. See, he’s not only too good for us, he’s too good for beer. Once in a while he might deign to push an oat soda past his lips, but even then he’ll only touch the finest version of the plebian drink. And this, in his universe of self-absorbed narcissism and swashbuckling extravagance, is Dos Equis. 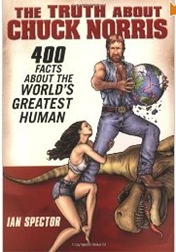 In the same vein as the book "The Truth About Chuck Norris," the Most Interesting Man in the World has lent himself to a growing internet mythology. Capitalizing on this, Ad company EURO RSCG started a Facebook page for people to post various legendary facts about the Dos Equis guy. It paid off handsomely, too – they’ve now got over a million followers with tons of funny tidbits like:

He won the Baja 500 in a Shopping cart with a roll cage.

Charlie Sheen is Charlie Dull to him.

He was once bitten by a king cobra, after weeks of agonizing pain….. the cobra died 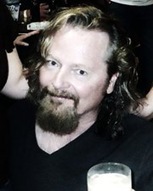 One of the Dudespaper’s esteemed contributors, Marc Mac was the first to realize that our beloved Dude deserved the same mythological treatment. After all, what do we know about The Dude outside of the film? If he is indeed "high in the runnin’ for laziest worldwide" as the Stranger says, then we’d love to know more about how he got that way. Every hee-ro needs some pithy myth to tie their life story together.

Duderino Mac put his abiding cap on and came up with this fine web page, a testament to the legendary back stories of The Dude, Walter and Jackie Treehorn. Funny shtuff in there, man. It really throws rocks, that site. 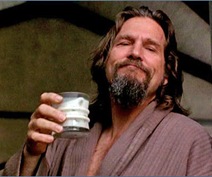 Inspired by the MacDaddy (a name he doesn’t choose to self-apply) we put up a Facebook page ourselves: www.facebook.com/DudeEquis to give the Dos Equis guy a run for his money or bones or clams or whatever you call them. How does he compare with the Dos Equis guy?

The Dude made a White Russian with non-dairy creamer and condensed milk. The resulting tension caused an explosion. That’s how our universe was created.

The Dude once drank the Dos Equis guy under the table — he preferred to lie on the rug.

The Dude has a block of cheese in his fridge older than the fridge.

So please visit the Dude Equis page, click on "like" and contribute your own "Dude Lore" for the annals of the new Dudeist Era. We might not get a million followers, but the ones that we do will be a lot more laid back. And in our opinion, man, more durn innarestin’ as well.