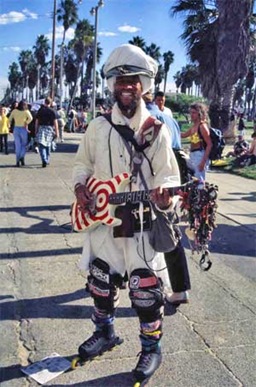 As we all know, the Dude lives in the City of Angels. But LA is a big place, full of lots of independent and unique suburbs and districts. In the beginning of The Big Lebowski, when the dude writes out his check at Ralph’s, some new shit comes to light: The Dude’s private residence is in Venice, smallish beach town just a bit westward the wagons from the official municipality of Los Angeles.

Now if there’s one place in the western hemisphere where the Dude would belong, it’s Venice. Overtaken by hippies some decades ago and generally known as a gathering place for freaks, surfers, the unemployed, longhaired bums with a strict drug regimen, and altogether people the square community doesn’t give a shit about, you might say that Venice is the right place for a man like the Dude. (Or is it the other way around?)

Along with the tumbling tumbleweeds, my lazy ass tumbled out west and ended up there, at the end of fabled Route 66. About a month before college kicked off I decided to undertake this holy pilgrimage and well dudes, it was pretty fucking a-okay. 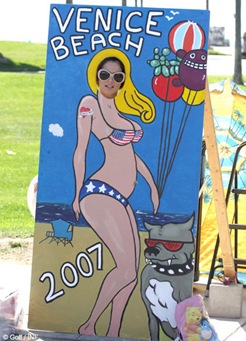 For three weeks I kept my mind and limbs limber by stretching out under the palm trees on the Venice boardwalk, enjoying my six-dollar hamburger combos, watching the lovely Bunny Lebowskis pass by, skating around and smoking the occasional California kush-filled J. And no cleft-asshole reactionaries bothered me; even so the old surfers, homeless dudes and cool-as-fuck vato-locals seemed very supportive of this lifestyle.

Venice’s Dudeist atmosphere lays in its rich and vibrant history. Originally created to resemble the original Italian Venice (including the canals), it ultimately turned into one of the United States’ last seaside ghettos. The culturally diverse, racially cool mix made a lot of hippies say fuck it and leave their homes, colleges, teepees or what-have-you and set up shop (often literally) on the sundrenched boardwalk. But it’s not all peace and love – local gang culture lends the area a rough edge, and rampant commercialism has dampened some of the formerly easygoing utopian ideals.

Like the Dude, a lot of Venice’s locals remain rooted in the sixties counter-culture; however, they carry along with them a street-wise savvy, making them able to maintain their cool but not get fucked by a stranger in the ass.

The constant stream of interesting and uncommon people leaving the great suburban bore for the final frontier of the alternative American Dream is still apparent in Venice today, as most of the people I came to know there fit this picture. 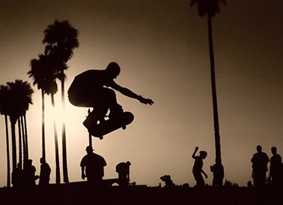 Another noteworthy thing about the Venice area is that skateboarding, along with surfing, basically started off here before taking over the US and the rest of the western world. It bears pointing out that the original skateboarders and surfers of these shores had (and still have) a lot in common with us dudes, aside from the X-games and all that shit. Remember Jeff Spicoli? These were his stomping grounds – probably even shared a wave or two with our good friend, good bowler, and surfer Donald Kerabatsos. Just like Bowling, surfing and skateboarding can be very Zen-like activities which exalt feeling “in the moment” and “going with the flow.”

Well, my moments in Venice flowed very nicely. Go visit this very Dudeist little corner of Los Angeles and yours probably will too. It helps that there’s a big medical marijuana dispensary right there on the boardwalk, with a doctor right next door who provides on the spot diagnoses and provides a prescription! Far fucking out, man!