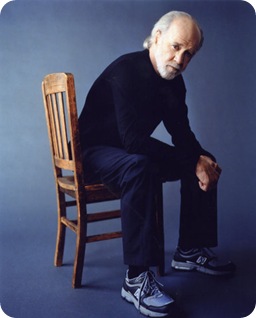 It’s another lazy, snowy day here at the Monastery, just takin’ ‘er easy with a hot cup of holy coffee and reading a cool book written by one of our Greatest Dudes in History, George Carlin.

It’s his last book, fittingly entitled Last Words, published in 2009, about a year after Carlin was placed forever in his final modestly priced receptacle.

It’s a purty good story, in which George (with a little help from his friend and fellow satirist Tony Hendra) offers anecdotes from an inneresting life devoted to making people laugh (and think) to beat the band.

According to Hendra, though, “autobiography” was not Carlin’s preferred genre nomenclature. 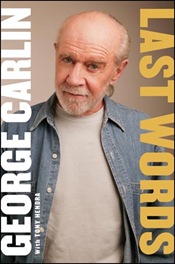 “George didn’t want to call it an autobiography,” Hendra writes in his introduction to the book. “Only pinheaded criminal business pricks and politicians wrote ‘autobiographies.’” Carlin also rejected the “narcissistic Gallicism” known as the memoir because it seemed too much like the “linguistic mongrel of ‘me’ and ‘moi.’”

So, in the parlance of Carlin’s earthy vernacular, call Last Words a “sortabiography”, please. And do it in English, too.

I’m about halfway through the sortabiography, so I can’t give it a full review yet, but I do like the life story that Carlin and Hendra unfold so far…most parts, anyway. I can’t help but wonder if the book wouldn’t have benefited from Carlin applying his workman-like writing style to the manuscript before he died.

Still, from what I’m reading, it’s clear that George Carlin was indeed one of us, rolling through all the strikes and gutters, the ups and downs of life, and abiding like a true Dude through it all. 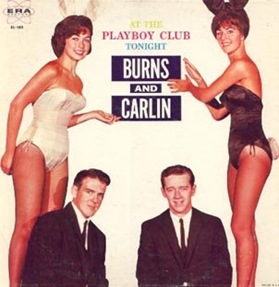 For example, when he and his comedy partner Jack Burns were trying to make it in Hollywood and discovered that what little money they had was stolen, Carlin muses in dudelike fashion:

“We had to get some dough, get work. But unfortunately we’d made a mutual pact not to ever really work. We would not park cars or wait tables. It was show business or starve. We had to get back into radio. Like I said, we weren’t going to work.”

After finding success as a professional comedian in the ‘60s, Carlin experienced (like many of us do) the tension between the person he had to be in order to feed the monkey and the inner dude he really was:

“I had a dual life between 1962 and 1964,” he writes about his early years in Chicago. “I worked in nightclubs to earn money and I spent most of my free time with the folkies, rock ‘n’ rollers, people from Second City. The outsider, the rebel in me was being fed by these associations. As a lifelong pot smoker I fit in that way, too. I felt comfortable around them. Already by this time they were beginning to look a little like the hippies they would become. Beginning to affect the free-and-easy physical style that went with their philosophies.” 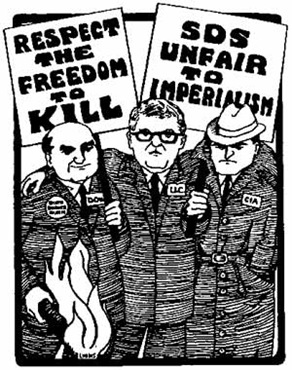 So, George was there at the beginning of the free-and-easy revolution that the Dude himself helped to ignite with his uncompromised first draft of the Port Huron Statement. And, although I’ve only made it half way through the sortabiography, I happen to know Carlin also lived to see that revolution return underground during the reactionary ‘80s and morph into various manifestations during the ‘90s and early 21st century.

While he may not have been a hero (‘cause what’s a hero?), Carlin continued to give voice to the essence of that revolution, even as many expressed condolences because they thought it was over. I don’t know if Carlin knew anything about Dudeism before he died, but he definitely remained true to and even embodied the tenets of our ethos right up to his curmudgeonly end.

That’s what it means to abide, man, which is why so many Dudeists like me, on a personal level, remain really enormous fans of this Dude called George Carlin.

Making it to the Finals: Dudeist Eschatology

Now, all this talk about “last words” and “the end” and whatnot brings to mind something else I’ve been pondering lately when not reading Carlin’s book or driving around: what’s the Dudeist take on the End of the World As We Know It? 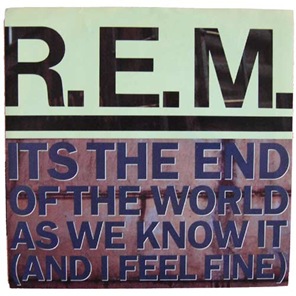 Like the Dude looking for the rug that tied his room together, we’re all like little children who wander into the middle of a cosmological movie, wanting to know how it’s all about and how it’s going to end. In their effort to give us a frame of reference for this unimaginably vast universe we find ourselves spinning around in, many religions offer stories about how it all began (like Genesis in the Bible) and prophecies letting us know how it’s all going to end (like the acid-flashback narrative in the Book of Revelation).

Even science offers up speculations on what may be in store for our solar system. According to a recent article, the Smithsonian Astrophysical Observatory in Arizona has detected a distant sun, named Chi Cygni, in the final throes of its stellar existence:

“Chi Cygni is now in a phase of its life called the red giant stage,” the article reports, “where it has inflated so much that, were it in our solar system, it would engulf every planet out to Mars. And indeed, the sun will likely do just that one day when it is a red giant. At that point, the Earth will most likely be toast.”

No need to panic or go quitting your day job just yet, though, dudes. This here end-of-the-world scenario isn’t scheduled to happen for another 5 billion years or so, give or take a few minutes. 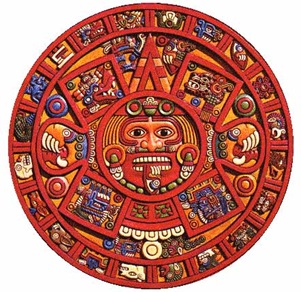 Of course, there are quite a few reactionaries and nihilists running around today claiming that the end is much closer than we think. Some point to the ancient Mayan calendar with its apocalyptic alarm supposedly set to go off on December 24, 2012. Others point to the “signs of the times” they believe indicate we’re nearing some kind of cataclysmic finale.

These dreadful signs include the increasing number of devastating earthquakes and severe weather events, wars and rumors of wars, famines, the ongoing financial meltdown, and perhaps most horrific of all, Lady Gaga’s recent duet with Elton John at the Grammys.

So, what does Dudeism have to say, if anything, about the End Times? Well, to be honest with you, dudes, I don’t know what to make of all this (especially the whole Lady Gaga thing). I don’t think anybody else does either, even though that doesn’t stop people from rambling on about it.

There is this thing called “eschatology” that’s supposed to help us understand what in God’s holy name these doomsday types keep blathering about.

From what I can tell, eschatology is a scary-sounding word that can be seen as combining the Latin phrase “e” (out of) and “scat” (another word for shit) with the suffix “–ology” (the study of), which gives you: “The study of scaring the shit out of people.” 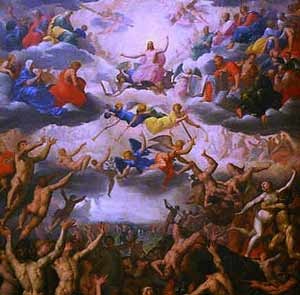 Well, that’s just, like, my opinion, man. It can also mean, according to wiser folks than myself over at Princeton, “the branch of theology that is concerned with such final things as death and Last Judgment; Heaven and Hell; the ultimate destiny of humankind.”

Either way, both definitions seem true to me. People are always concerned about the big picture, ultimate destiny of humankind in one way or another, but I think even more of us enjoy having the shit scared out of us as well. In both cases, our attention is diverted away from having to deal with the more mundane aspects of our daily lives.

Regardless of whether we all only have a couple more years left (as some say about the Mayan calendar), or whether we’ll have to continue finding things to do for the next 5 billion years, the simple truth is we’re all going to face our own personal end time one day. Before that happens, be sure to take it easy and enjoy as much of the ride as you can. 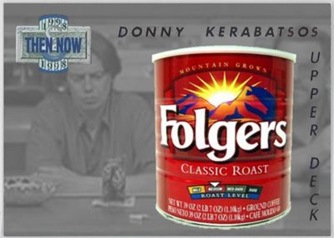 I think the Dudeist take on eschatological concerns is the same answer we have for everything: You can’t worry about that shit, man. Life really is too short.

Spend your time being true to yourself and to those you love, savoring the time, creating something, watching The Big Lebowski yet again before venturing outside to feel the sunshine. Stay human.

That way, after you wrap it all up and speak your last words you can die with a smile on your face knowing the cosmos was never trying to scam anyone here, man.

I don’t know about you, but I take comfort in that.