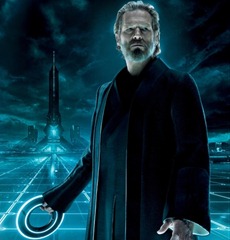 This summer I went to the Zen Peacemakers Symposium for Socially Engaged Buddhism. It was an excellent experience, but what made the trip epic was meeting the Dude, Jeff Bridges, in person. I arrived early on the day Jeff was to attend the event, he was to give some talks, and then a small concert. I also wanted to get my Zen on, there were a lot of very interesting people scheduled to speak, and so much I was keen on experiencing beyond just coming to see the Dude. The Zen Peacemakers and Engaged Buddhism are two things I am looking to become more involved with. 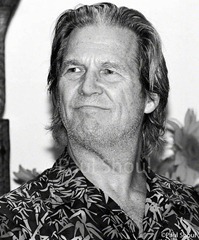 Jeff arrived at the symposium and gave his "give Bernie a little head speech", which was enlightening and hilarious, he and his message were well received by the crowd. Sharing his talents in order to benefit others is the kind of thing the Dude would do, like going to dance recital or just being a good friend. The "Little Head" he brought for Bernie Glassman showed that this guy is no one trick pony, a truly creative Dude. I would recommend to any Dude with a thousand clams to burn, get one of these heads, you don’t keep it forever, but they are cool and it will help spread Dudeliness.

As the discussion came to an end, I felt the call of nature. Making my way to the rest room, by happenstance I ended up in line right behind the Dude, whoa. Suddenly faced with a quandary, do I approach the man I have come to meet, while he is in line for the bathroom, and risk being a total dork, or risk not getting another opportunity. I went for it, I mentioned how I appreciated what he was doing there, and let him know I was a Dudeist, and could I ask him a few questions. He was totally cool about it, of course he wanted to use the rest room first, but would be happy to chat with me. I was stoked. 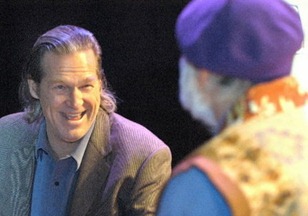 When he came back out, we had a nice chat about his thoughts and awareness of Dudeism. He made it clear he was aware of us, and he thought it was way cool what we are doing. I asked if he thought it was weird that a religion has formed around a character he played in a movie? He said, "yeah I think it’s a little weird, but it’s great man, I dig it" (I may be paraphrasing a little). We talked for several moments about the ins an outs of Dudeism, and he was thrilled that a Dudeist priest made it to the Symposium. I couldn’t get over how easy going and friendly he was, no air of Hollywood elitism, just two regular Dudes talking Dude stuff. He asked if I would be staying for his intimate concert that night, I said I wouldn’t miss it, and we agreed to chat some more later. 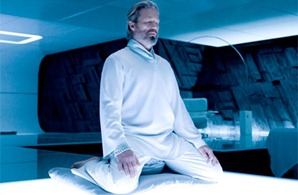 After that this Dude was lost in some sort of acid flashback kind of mindset, I couldn’t get over just hanging with the Dude, and being surrounded by the Zen Dudes made it a bit surreal. The Symposium had this odd sense to it, and I wasn’t the only one to notice. It was quite literally the nicest place I have ever been. There was a feeling that there was no need to be the least bit defensive, as no one there was out to harm or take advantage of you in anyway, it was like visiting Nirvana, a happy Sangha going about it’s caring work with contentment and community. 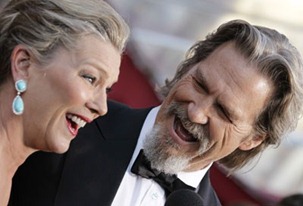 I truly lost myself in the spirit of community around me, and started joining in with helping out as much as I could. I ended up helping move a large ladder, I offered to take the burden and then saw that it was Jeff’s wife I was relieving from carrying this big ol’ ladder. Abiding and not trying, put me in the right place and frame of mind to come to Susan’s aid, being in the moment made my moment.

Well after that, Jeff and his wife were more than happy to let me hang around them, and while talking to Susan she mentioned that Jeff was going to be the first American Master of the new season on PBS, and it would be cool if I helped get the info out there. Got that Dudes, The Dude is an American Master (like we didn’t already know that), be sure to catch his show (on January 12, 8pm) on PBS. 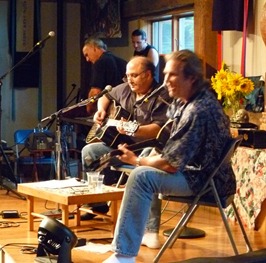 Thinking this was a great day to be alive and Dudeist, it got even better as Jeff and long time friend John Goodwin took the stage. They played a lot of very cool music, including some they had written for Crazy Heart. The crowd of Zen Dudes and Buddhists were alive with the Dudes musical styling, one of the best shows I have ever seen, close and personal, full of fun and goodwill. As summed up by another attendee, "that was not undude".

After the show I got to tell Jeff about The Dude De Ching, asked if he had heard of it, he hadn’t, so I offered to give him my copy. He seemed really quite thrilled with it, and mentioned how Bernie had done a bunch of koans based on the Big Lebowski. He really dug that there was a "holy" Dudeist book based on the Tao, he is quite familiar with the Tao and totally saw the connection. So Dudes, the Dude De Ching got an unofficial, first look, stamp of approval from the Dude, he dug the style.

Jeff is a really deep Dude, and we talked about all kinds of cool shit. He is definitely a qualified Dudeist, the fact that he is so much like the Dude, is just more proof of the synchronicity involved in Dudeism’s genesis. A holy trinity if you will, story, character and actor, all just right for their time and place. With Jeff being a Dude, not just playing one, it gives body to the idea of Dueism, like enriching the soil of it’s birth. When you look back at his work, you can see a lot of "enlightened" characters and stories, it is no secret he is a 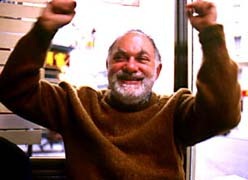 Buddhisty inspired guy, even his new Tron movie has elements of Zen, he had asked for Bernie’s input on the story.

It is completely right that he is being profiled on American Masters, this Dude can sing, act, sculpt and is an inspiration to many. Being the Dude is just one aspect, he is a damn good actor as well, there is an easy going depth to his work, that working for it could not recreate. The man elevates abiding to an art form, literally. I applaud American Masters for choosing this Buddhisty Dude for their season premiere, and I am honored to have met a true American Master.