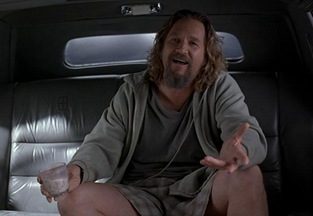 I wouldn’t say the title has great meaning to it, however it just happens to be my favorite line as of late. It can be applied to oh so many things. You might remember it from the second limo scene in The Big Lebowski. Mr. Lebowski’s limo driver has just thrown the Dude into the back of the car to talk with Mr. Lebowski and Brandt.

Well sure man, look at it! Ya know. A young trophy wife, in the parlance of our times, ya know. She uh, uh, owes money all over town, including to known pornographers–ha,and that’s cool, that’s that’s cool–I-I’m saying, she needs money man, and uh, you know, of course they’re gonna say they didn’t get it, uh uh, because she wants more, man, she’s gotta feed the monkey, I I mean–uh, hasn’t that ever occurred to you man? Sir?

The Dude is informing his new employer of sorts that Bunny, Mr. Lebowski’s wife, may not be completely on the up and up. Is this really our concern? Is Mr. Lebowski as shocked as he appears? In all honestly this probably doesn’t concern us too much in our daily lives, but with the economies of the world taking a turn for the worse, I think there’s some wisdom imbedded here.

In this movie I see two types of characters who deal with money in different ways: some who are influenced by it and some who are affected by it. Some of the characters are clearly driven by money and the pursuit of possessions: just look at Mr. Lebowski. Here’s a man working so hard to keep up the facade of wealth and prosperity he sinks to embezzling money from a fund for the underprivileged youth in his community. Jackie Treehorn is a pornography baron, masquerading as a publisher, who employs foreigners and runaways, sucking them into a spiral of unrecoverable debt. You also have Walter who, even though he means well, tends to mess everything up by trying to help out and make a few bucks while he’s at it. 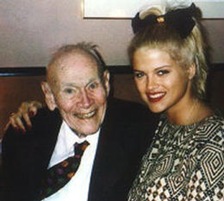 Then there are those affected by the the actions of those people. Bunny has gotten herself into pornography and has married a wealthy older man (not too unlike Anna Nicole Smith — except The Big Lebowski wasn’t really that rich). I’m sure Fawn — Bunny’s real name — just wanted to get out of Minnesota and become an actress; it’s a dream that won’t be realized any time soon. Marty the landlord will soon have to deal with the repair of the Dude’s bungalow. I sincerely hope Larry Seller’s neighbor got full coverage on that red Corvette. And then there’s Donny — poor Donny. All Donny ever wanted to do was fit in. He had found his niche, his pals, and a place to call his own. Then it all came crashing down in the form of a heart attack brought on by a couple of self-proclaimed nihilists demanding every last cent from his pockets.

Lastly, I come to the Dude. The Dude abides, right? He doesn’t let all of this nonsense get to him. He also has the inner fortitude to stand up to his bullies and do what’s right no matter what the cost, am I wrong? The closer I look, I’m not so sure. The Dude pays for his half-n-half and coffee at the diner, but steals a rug from Mr. Lebowski. The Dude seems concerned for Bunny’s well being, yet accepts offers of $20,000, $50,000 and $100,000 to participate in the three-ring circus of delivering the stolen money (for Mr. Lebowski), retrieving the stolen money (for Maude Lebowski), and helping to settle Bunny’s tab with Treehorn’s production company. He also immediately rolls over on Larry Sellers, a 15 yr-old delinquent struggling in school with a rocky future and a father confined to an iron lung. Knowing first-hand what Treehorn’s thugs are capable of, is the Dude so noble to rat out this unlucky teenager for a 10% finder?s fee? You might also accuse the Dude of tax evasion for trying to accept payment from Mr. Lebowski in the form of cash to prevent being bumped into a higher tax bracket. 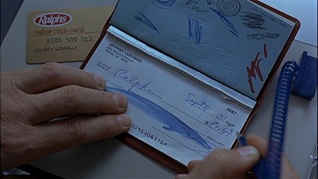 Am I stepping on toes here? Is the Dude not as Dude-like as we think him to be? Don’t worry; I haven’t gone off the deep end. There are just a lot of strands in old Chalupa’s head and the Dude’s finances are not the issue. What we really need to be looking at is the money. Money is a deep-rooted theme in the film, but when do we actually see it? Other than the Dude writing a check at his local Ralph’s, we see actual cash only two other times in the film. The first would be old Duder rustling some change out of his pocket to pay for his coffee and the second would be when Dude and Donny are emptying their wallets to appease the nihilists. So what about all the other money? What about the million dollars and the other thousands offered to the Dude in rewards? Did any of it really exist?

While Walter views most of the shenanigans as a "series of victimless crimes," I see the current state of the economy victimizing many. Some may be victims of poor financial choices and planning, but many others are just victims at no fault of their own. Most of the banking and financial system seems to work with the same kind of "imaginary" money that’s thrown around so easily in The Big Lebowski. So what can we do to weather through these times of uncertainty? I think the Dude might have a few tips to give…

Well these are just a few tips, and i’m sure you can come up with some more. You might also be interested in checking out the most recent Lebowski Podcast episode on the same topic. As always, we appreciate your notes.