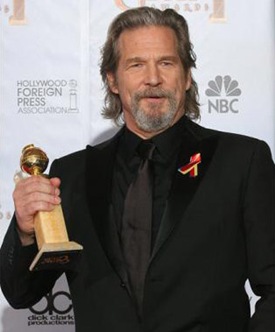 Proud we are of all of Jeff Bridges. After a lifetime of giving some of the most memorable, heartfelt and honest performances on screen it looks like he might very well finally get to put some of the highest awards and commendations on the wall of his study. He just won the Golden Globe and Screen Actors Guild Award for best actor and is in the lead (we hope) for the Oscar.

Pauline Kael called him “the most natural and least self-conscious screen actor who ever lived” but we just call him the Dude. That’s what you call him. Because as people who have met him will tell you, he’s really a lot like the Dude in person, although maybe with fewer rough edges.

One of the things most remarkable about Bridges’ acting career is that he has tried hard not to work so that he can spend more time kicking back on his ranch in Santa Barbara. Like a great Taoist master, he chooses to work when the spirit moves him, not by compulsion. This great interview in Entertainment Weekly sheds a little light on Bridges’ Dude Way: his irrepressible fascination with the little joys in life, his poetical ramblings and his profoundly good nature.

So let’s all say a Dudeist prayer for our Dude avatar — it’d be nice to see a truly nice guy finish first this time, even if it is just a gold brick that only the square community really gives a shit about. In any event, whether he wins the esteemed Oscar or not, he’ll always be the dude for our time and place, and number one in our tournament of chillaxed champions.