A few weeks ago, The Dudely Lama traveled from the City of Angels (LA) to the City of Apples (NY) to film a segment about Dudeism for ABC’s Nightline program. The segment is meant to air May 30 or 31 (who’s in charge of scheduling?). Be there, man. What a short, strange trip it was.

But it was a hell of a lot of fun. One of the best parts of the filming was hanging out in The Little Lebowski Shop in Greenwich Village with very dudely proprietor Roy Preston and many other uberfans of our sacred film, including Adam Bertocci, author of Two Gentlemen of Lebowski. Adam gave a rousing (and relaxing) speech about Dudeism which he has knaveciously allowed us to reprint below.

Note that both The Dudely Lama and Adam Bertocci will be hosting screenings of The Big Lebowski at the online theater experience www.constellation.tv very soon (Dudely on Thurs May 24 and Bertocci on Tuesday May 29). Sign up soon if you haven’t already! Note that after discounts (see this post) it’s only a modestly-priced $2.40 or so. You get to text chat during the movie and participate in a live Q&A with each of the hosts. You got a date Thursday and Tuesday, baby! 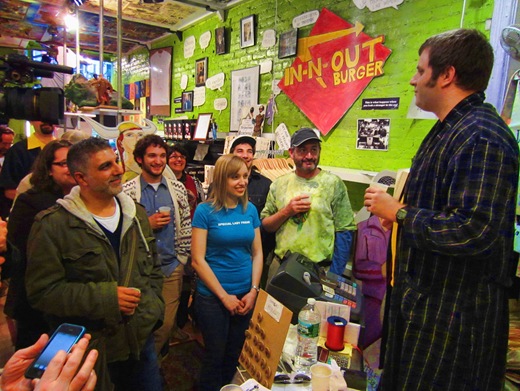 Dude afternoon. My name is Adam Bertocci, and I am the author of Two Gentlemen of Lebowski, the world-famous, beautifully-illustrated, fully-annotated, historically-accurate, modestly-priced Shakespearean translation of The Big Lebowski.

But it’s appropriate in a way, it illustrates the cycle of life and death, just like at the end of the movie, with Donny’s death and the prediction, the foretelling, of the little Lebowski. Life and death and rebirth… I guess that’s the way the whole durned human comedy keeps perpetuatin’ itself, down through the generations, westward the wagons, across the sands of time until—ah, look at me, I’m ramblin’.

As such, I take as my text the prologue from Two Gentlemen of Lebowski. The movie as it deserves to be read, in the original Elizabethan.

Here, Adam read the prologue; you can read it and a couple of other scenes for free here.

Or buy the book here. 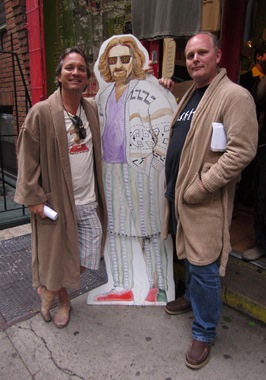 We do not have churches any more. Not the way we used to.

Here our faith has always been determined not by law but by culture.

And they say America doesn’t manufacture anything any more, but this, I promise you, we make: culture. Pop culture.

Just like Shakespeare, the entertainment industry looks around this great big world, sees what it likes, takes what it wants, mashes it up and makes it something new.

That’s how movies get made.

I believe in the power of movies. Movies are our church. We get together with friends or family at the designated time and place, and we go into a big special room with a bunch of other people from our community. And we sit down and we watch and we listen. 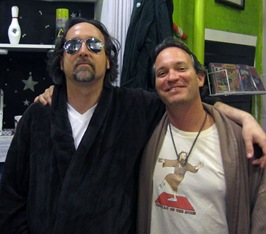 It happens all the time. Star Wars was a pop primer to mythology and the works of Joseph Campbell. And this beautiful tradition that all the stories they keep telling are one. I’m not saying that you watch Star Wars and understand the whole thing, I’m saying that if the movie touches your heart at the right time in your life, it’s a gateway drug. You go, you do your own research, you learn more.

The Matrix was a pop primer to various philosophies—Plato, Baudrillard. I once again emphasize “pop”. The little flicker that gets you thinking about things you never thought about before.

Could The Big Lebowski introduce this country to Eastern thought? Well, why not? 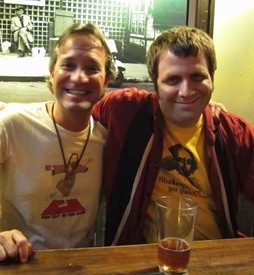 I was hoping to close with some words not from a Dudeist but a Buddhist. His name was Atisha, he was active around the 11th century. And he said something great, except I lost my speech.

So instead I’d like to share with you a story I read in Joseph Campbell, who I talked about before.

And he said: “The sermon is already delivered.”

The words from Atisha that Adam had meant to recite were as follows:

It turns out that his speech was in his bathrobe pocket, which he had not thought to check. Let this be a lesson that even a casual fashion can trick an unlimber mind.

[Photos: 1) Adam reading to the assembled Dudeocracy; 2) The Dudely Lama and the Arch Dudeship; 3) Roy Preston, proprietor of The Little Lebowski shop with DL; DL and AB out for a round of sack (or was it mead?)]

Previous Post: Mind If I Do a J?
Next Post: The Big Lebowski and The Big Kahuna: Dudeism and Hawaiian Mysticism