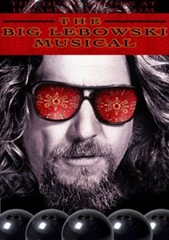 If only the Coen Brothers would ever allow this to happen…A Big Lebowski Musical. Our friend Chuck over at Ideas by Chuck thinks up some groovy stuff, but this one really sings to our Dudeist soul.

Sounds absurd, of course, but what a bizarre, perverse, psychedelic experience it would be. Imagine The Dude flying over the audience with his bowling ball during the dream sequence; the Busby Berkeley dance number done in vivo, the burning car, er…that might be a fire hazard. And an amphibious rodent, well, um, that ain’t legal either.

Better yet, it could expand on the original film – perhaps showing the young Dude in college, smoking Thai stick, all the way to the old, dying Dude on his deathbed trying in vain to find any regrets in his life (too few to mention…He did it Dude’s Waaaaay. Cough, cough. Splutter. Toke.)

Hell, maybe some brave Shakesbeer out there could just go ahead and write it anyway and send it to the Coens. Maybe they’d say "fuck it" and let us have the rug anyway. If nothing else, in 70 years (from 1998) the copyright will pass into the public domain. Not too many of us will be alive to see it, but it’s nice knowing it’s out there, in the future, just waiting to happen.

Personally, I’ll be 100 years old at that point, and will probably have health problems. Even so, all us die-hard Dudeists should all do our best to make it to that opening show — in bathrobes, wheelchairs, or even iron lungs. Then we can die with a smile on our face, without feelin’ that the good lord gypped us. Am I wrong?