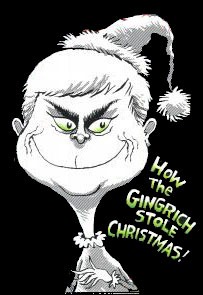 Come on man, I’m not trying to scam anyone here…I’m just a…let me explain something to you Mr. Newt Gingrich (a.k.a. the “Scrooge-Grinch”). Your comment that those in The Occupy Wall Street Movement need to “go get a job, right after you take a bath”…well man, that’s just like your opinion, and ah…fuck it. That expression will not stand!

Did it ever occur to you sir that you’re the scumbag, paraquat, and goldbricker that’s a fake if ever I saw one…Taking 1.8 million from the corrupt Freddie Mac while micturating on the rugs of others is clearly a plot throw everyone off the case…it’s all a goddamn fake…It’s like Lenin said, look for the person who will benefit…

Just because we are bereaved about our fellow 99%ers that were gunned down with pepper spray doesn’t make us saps…No, I do mind…the Dude minds…this will not stand you know…this aggression will not stand, man… 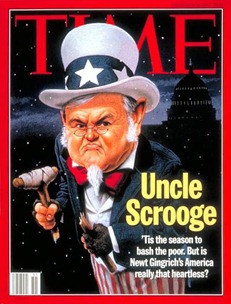 And you think you have what it takes to be in charge of the free world?…What is this bullshit, man? I don’t fucking care! But you’re not fooling me! You might fool the tea party and the square community, but you won’t fool the Jesus! It’s bush league psych-out stuff! Laughable, man!”

Now Mr. Screwt Gingrinch, you’re being verrrrry undude in your contempt for the Working Class, Teachers, Blue Collar Workers, and the rest of us 99%ers of this country. Do you think I could get some that action with those credit swaps sold by AIG on those fraudulent government backed mortgage securities backed by your buddies at Freddie Mac and that your 1% buddies on Wall Street and the Banks sold to Freddie Mac and the rest of the saps out there? It’s uh… uh… it’s down there somewhere, let me take another look…So that’s why you guys hope your cronies in congress keep propping up and giving AIG money…That’s fucking ingenious, if I understand it correctly. That’s a Swiss fucking watch…Got to keep the bookie afloat so you can come up with more clever scams…Far out. 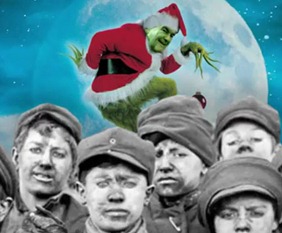 Oh you’re not wrong Gingrinch, you’re just an asshole…But it’s truly a bummer for the rest of us, the 99%, who the 1% community don’t give a shit about…we get left holding the ringer…I hear you now…“GET A JOB…TAKE A BATH”…And that’s exactly what we did: took a bath in your bad bets, Mr. Gingrinch, which happened to slow the whole world’s career lately. And now you add insult to injury by throwing marmots in our tub while we try to wash off the dirt of your muck we’ve fallen face down in!

Watching you I’m reminded of what well could be considered your unauthorized biographies: The Grinch That Stole Christmas and A Christmas Carol. 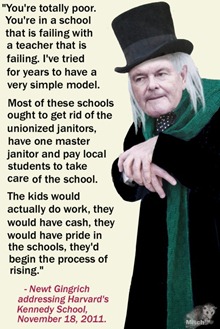 Are there no prisons?…And the union workhouses – are they still in operation? Oh, from what you said at first I was afraid that something had happened to stop them in their useful course. I’m very glad to hear it.

[Ebenezer Scrooge, from A Christmas Carol
by Charles Dickens]

And of your Grinchy compeer it was said:

You’re a monster, Mr. Grinch, Your heart’s an empty hole, Your brain is full of spiders, you have garlic in your soul, Mr. Grinch, I wouldn’t touch you with a thirty-nine-and-a-half foot pole!

…You’re a foul one, Mr. Grinch, You’re a nasty wasty skunk, Your heart is full of unwashed socks, your soul is full of gunk, Mr. Grinch, The three words that best describe you are as follows, and I quote, "Stink, stank, stunk"!

[From The Grinch Who Stole Christmas by Dr. Seuss] 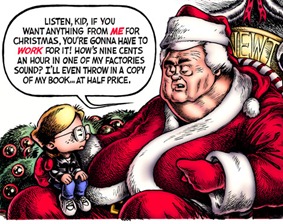 This in mind, perhaps it’s you who should take a bath and get an honest job, sir. I rest my business papers. What’s left of them, anyway. You know it’s been fucking stolen!

So, in wrappin’ er up, please Mr. Screwt Gingrinch…go back to your lair and leave us the fuck alone!

Okay, time for that bath you recommended. Mind if I burn a jay?

P.S. This is not just my opinion man. Enjoy these videos.