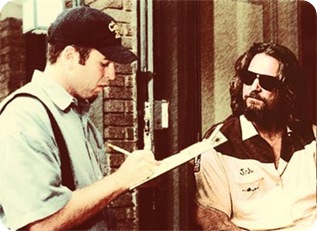 By The Arch Dude of York, Kristian Lewin

So my census arrived this morning. After scanning the pages I realised there’s quite a lot more to it than I remember from ten years ago. Maybe this is because ten years ago I was a stoner who was happy to fill in any form pushed in front of my face, I mean after all there was little else to do then. Maybe it’s because things get a bit hazy when you smoke an awful lot of pot. Maybe it’s simply because it was TEN years ago. Whatever the reason I certainly don’t remember it being so intrusive. 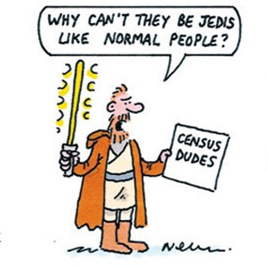 Now however, I have a lot less time on my hands and after ten years have become a bit more concerned about the information I divulge. I think as you get older you get wiser (some may say grumpier). It’s a very lengthy form and thankfully there was the option of filling it in on-line. This certainly saves a lot of time especially when you have psoriasis in your thumb on the hand with which you right.

After 3 years of working in the card and identity protection industry you become slightly wary about the details you pass onto people. I mean why on earth do the government want to know the name of the company I work for? The best part of the census form was when asked about my children. Let me explain. My two children are Emma and Sebastian, 5 and 2 respectively. One of the questions was ‘On the 27th March 2011, what is your legal marital or same-sex civil partnership status?’ This could easily be avoided if the system was intelligent enough to pick up on the fact it asked me only one question before what their Date of Birth was. Am I just being grumpy here? I’ll let you decide. 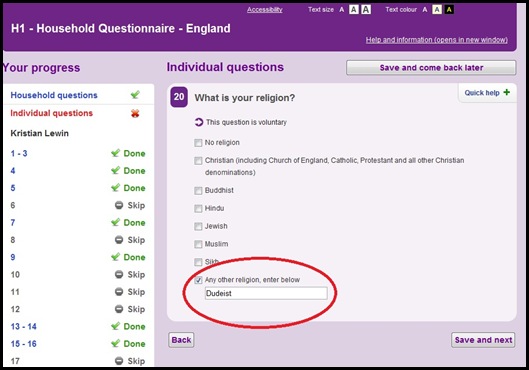 Anyway the main point for my blog is to highlight the religion question. ‘What is your religion?’ How many people do we think would be offended if a perfect stranger asked this question? I for one wouldn’t but it has been the height of controversy since it appeared on the last census in 2001. Now maybe Dudeism won’t get as strong a response as Jedi did back in 2001 but then that’s not what we’re about. To put Jedi as your religion on the last census was an attempt to make a mockery of the question. Marking Dudeism as your religion this time round is simply to make a point. It’s to show the world that there of us out there who refuse to get uptight about things. I set up the group on Facebook ‘Dudeism for the 2011 census’ with that sole purpose in mind. We all know that Dudeism is the slowest growing religion in the world, something that as an ordained minister I am very proud of. We have no intent of rivalling Jedi (not just yet anyway) nor even the ‘Heavy Metal’ campaign also going around on Facebook but we are here with a purpose. That purpose is to teach the world how to take ‘er easy. To not get too uptight when the ringer is thrown from the car or when the toe goes over the line.

We are simply here abiding and I don’t know about you but, I take comfort in that.

Time for a caucasian I think.

Take ‘er easy Dudes, I know you will.

See the article about Dudeism and the UK Census in the Times of London article (reprinted at the Arch Dude of York’s site. 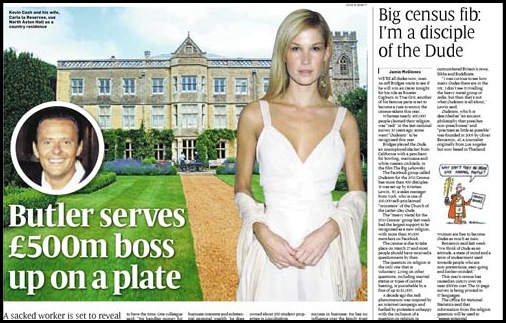