Ever since my “Laughing Buddha Trout Fishing In Mountain Stream Tattoo On Bald Biker Named Buddha” Suntory-satori, the North Beach bar I have been a regular at for decades has taken on a whole new shine.

Now it seems like some kind of exotic, spellbinding power spot instead of a local dive. I have been to the Buddha Bar in Paris…and it can really dial you down to mellow while blowing your mind all right…but nothing compared to the hit I now get just walking into what I have re-named "The Duder Bar."

So in I go…for the first time since the “Suntory-satori” occurrence. A blast of some kind of weird energy hits me in the face as I go through the door and knocks me back a step. Down the bar in the shadowy light a number of people are crowded around a tall, bald guy in Buddhist robes. Looks from a distance like the Dalai Lama, but how could that be?

The bartender’s voice booms out, “Hey Hieronymus…get you ass down here…somebody you gotta meet!”

I squint as my eyes adjust to the darkness and stumble down the bar toward Louise the bartender. Couldn’t be the Dalai Lama…the Dudely Lama?…naaa…the ultra-reclusive, mythical Dudely here? The group of people part and a grinning from ear to ear Bruce Willis looking guy sets what looks like a double bourbon on the bar, puts his hands together and bows.

“Say hello to Chogyam Dada,” says Louise. “He knew you were coming and has he got a tale to tell…been hanging out with The Dude…”

I return this guy’s bow and give him a good look up and down. He drains his bourbon.
“…and Walter and Donny”…says Chogyam, finishing the thought in a deep Mississippi accent.

Louise shoves my usual double Caucasian across the bar and pours Chogyam another bourbon.

“So, are they down the street at the motel waiting for your ass, man…?” I reply sarcastically. “Where you from anyway…Chogyam? You don’t talk like Tibet…”

“Don’t be such a hard-ass Hieronymous…he was just telling us about all this far out stuff,” chimes in the ever present and always enthusiastic ‘Bub’. 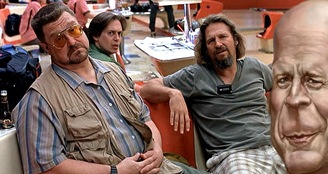 “Well, please continue then, man,” I insist as I take a heavy pull upon the Russian.

Chogyam does so, “I’ll back up a little bit…the Cliffs Notes version is this…fictitious characters in books, plays and movies…are thought forms which actually exist and become more and more independent…and stronger the more they are ‘exercised’…the more attention is paid to them. For example, Hamlet has been exercised a lot because he has been played over and over in all the productions of the play.

“These characters, and other thought forms, exist in what I call the Imaginal Realm…the ‘Otherworld’…which interacts with what we call reality all the time. One way these characters show up and hang out in our world is in dreams…now pay attention because this is the important part. We interact with them all the time but usually don’t recognize these folks for who they are…unless we have a lucid dream…a dream where we realize we’re dreaming, then can take the time to talk to these strangely familiar ‘people’ who turn up, or we invite in…then remember it later.

“Tibetan Buddhism has a practice called Dream Yoga that we use to play around with lucid dreams for all sorts of reasons. With a little practice we can get several people in on the same lucid dream, and they can talk to each other in the dream…and talk to the thought form beings they find there, or bring there with their group intention to do so…

I begin to see where Chogyam is going with this. “So Chogyam, now you’re going to tell us…”

“Let him fucking finish Hieronymus,” Louise insists, so I shut up.

“Thank you sir,” Chogyam intones graciously in my direction. “Anyhow, a group of us at the Dream Yoga Institute are huge fans of The Big Lebowski…go to Lebowskifests…get ordained…so now I’m a Buddhist Dudeist…and so on, and what not…so we figure…we do all this dream yoga practice for spiritual reasons…let’s see if we can contact the Dude and Walter and Donny…they must be really chillin’ INTENSELY out there somewhere because of all the energy they get from the fans…people “getting into character” and all. So we did. Kinda strange…THEY don’t quite know what to make of us, or who the fuck we are wandering into the bowling alley looking lost… 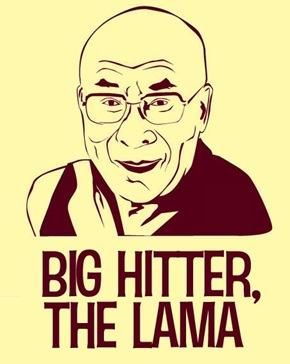 “You just said fuck, man…” I have to point out. “I didn’t think a Tibetan Buddhist priest would cuss like that…and drink one straight bourbon after another, either.”

“You obviously aren’t familiar with the work of my teacher…Chogyam Trungpa Rinpoche, man…” Chogyam grins.

“Far out,” I offer….being familiar with the doings of Chogyam Trungpa, This guy may be OK after all. Full of shit maybe, but OK.

“I’m not ‘full of shit’ Mr. Moondog…as you were just thinking. I can take you to meet the Dude ‘in person’ if you’re willing to work at it a little. May take some time, but it will be worth it.”

Did this guy just read my mind? Maybe he’s not completely full of shit after all. I am familiar with the stuff he was talking about…just never experienced it. I decide to take him up on his offer. I will fill you in about who this guy is, how he wound up in the Duder Bar, and the results of my experiments at the Dream Yoga Bowling Alley with the Dude and company as time goes along.

On a final note for this installment, I’m including an image of the business card Chogyam Dada, who also calls himself the Salvador Dali Lama, gave me as we parted…

Previous Post: And Now, a Little Feminism
Next Post: Jesus, Man, Can You Change the Channel? – Dudeism on the Radio