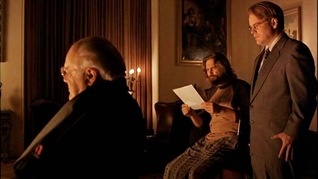 By Chalupa (Lebowski Podcast) and The Dudely Lama

In the second episode of the Lebowski Podcast, we discussed what it means to be a man, a prominent theme in The Big Lebowski.

You might remember the greatroom conversation between The Dude and the Big Lebowski:

LEBOWSKI
Funny–I can look back on a life of achievement, on challenges met, competitors bested, obstacles overcome. I’ve accomplished more than most men, and without the use of my legs. What?What makes a man, Mr. Lebowski?

LEBOWSKI
Is it being prepared to do the right thing? Whatever the cost? Isn’t that that makes a man?

DUDE
Ummm..sure. That and a pair of testicles.

In this scene The Dude learns that Bunny has just been kidnapped. Mr. Lebowski is also trying to put on a show, feigning his sadness, and is asking The Dude for help. So what makes a man? Is it courage? Is it doing the right thing? Are male genitalia the only requirement? Well dude, we just don’t know. Let’s take a look at some of the common male archetypes the Coens have presented us with.

At first glance, we could break the male characters into three groups. The first would consist of those society has historically told us are “manly.” These characters are assertive, proud of what they do, and sure of who they are. These men take charge, they get what they want, and there is no apologizing for what they do. They are businessmen. They are entrepreneurs, they are athletes, and they seem to be men who are looked up to, even feared. This group would include Walter, The Big Lebowski, Jackie Treehorn, Jesus Quintana, and the Chief of Police of Malibu. 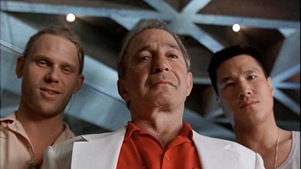 The second group of men are almost the opposite of group one. They are not assertive, they don’t always get their way nor do they always speak their mind. They are not always sure of themselves. They might be considered followers or even yes-men. They do what they’re told and they rely on others for direction and advice. This group would include Donny, Marty, Liam, and Brandt.

The third group doesn’t really qualify as group at all. In fact, it’s just one person — The Dude. Here and there, The Dude exhibits some qualities of both groups, but is distinguished from the other two groups by the fact that he is really a man unto himself. He’s not overly assertive or macho like the first group, nor is he a pushover like those in the second. Though some might disparage him as a slacker, a deadbeat, or a loser, he in fact commands the respect of most of his detractors. While he isn’t afraid to stand up to any of the hyper-alpha males, he generally does so in a relatively gentle, passive way.

Just because others might put you into one of these groups doesn’t mean that’s how you see yourself. This doesn’t even mean that’s where you want to be, or where you will be in the future. A wise person once pointed out to me that well respected people don’t just become that in a day, a week, or even a year. Character, personality, morals, and values are achieved over time.

Walter, The Big Lebowski, Jesus and Jackie are all people that tried to portray greatness and grandeur. Yet eventually, we all saw that they were, to borrow T.S. Eliot’s term, hollow men: Powerful Lebowski out of his 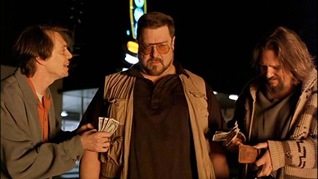 wheelchair and helpless, weeping, on the floor; cocky Jesus fearfully informing his neighbor that he’s a sex offender; and idealistic Jackie showing he’s nothing more than a mercenary. Even hardnosed, implacable Walter turns out to be a big softie behind all the bluster, pining remorsefully for the loss of his wife and others close to him.

Neither are these men so capable as they claim: Walter tends to mess things up for the Dude more often than he helps. Jackie is really nothing without his thugs. Outside of the bowling alley Quintana is just a registered sex offender. And most of all, the titular Big Lebowski turns out to be a miserable old man estranged from his family who resorts to stealing money from a foundation for needy urban achievers.

In the shadow all this false bravado, we might reevaluate Donny, Marty, and Brandt and find three sincere men who were braver than we realized. Donny wasn’t afraid to stand up to the nihilists. He had eighteen dollars and was willing to take one for the team. Brandt showed up to work every day and did a pretty good job at whatever Mr. Lebowski needed — few people could have the fortitude and discipline to put up with Mr. Lebowski and Bunny. Finally, as noted in the last column, Marty worked up the courage to ask the Dude to come to his performance and take notes. If you’ve ever participated in anything art-related, you know how hard it is to bare your soul to others.

The Dude, meanwhile, has risen above the whole macho/milquetoast dichotomy. And like a modern-day Buddha, that release of the ego has allowed him to exude a profound compassion for everyone. Have you noticed all the crap he has to deal with from Walter? While trying to deliver the 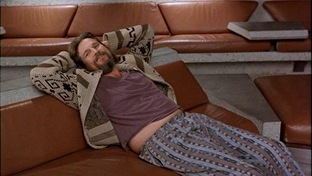 money to the nihilists do you remember his concern for “that poor woman?” The Dude may not be living the high life. He doesn’t have a lot of possessions, his home seems easily broken into, and he also gets roughed up often. All of this crap in life and he still has a forgiving, accommodating attitude. Life goes on. The Dude abides.

So next time you’re pondering life and thinking about how you want to be remembered, maybe look back at the characters from The Big Lebowski. What makes a man or woman? Is it a pair of testicles or the lack thereof? Is it what they do and say? Is it how they deal with life?

Of course, many important characters have been left out of this essay, such as the Nihilists, the Corvette owner, Da Fino, Arthur Digby Sellers and little Larry, the Stranger, Saddam, Knox Harrington, the cab driver, the limo drivers, Francis Donelly, various thugs, and so on. How do you think they fit into all this? This is your homework, Larry.